by Staci Troilo
on October 15, 2015
Looking for something steamy for Christmas? Look no further. 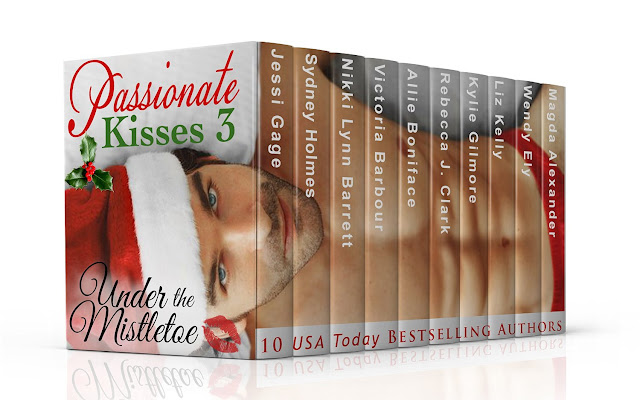 Curl up under the mistletoe with these 10 brand new novellas in the sexy Passionate Kisses romance anthology! From Italian stallions to bad boy bartenders, small towns to big cities, all of these stories by USA Today best-selling authors promise to keep you warm this holiday season.

Get into the Christmas spirit with PASSIONATE KISSES 3. Limited time offer, so grab your set today! ONLY 99c

Single mom Cassie is nowhere near ready to love again. It’s only been a year since her husband passed away. But when a neighborhood emergency brings an old crush, Seattle cop Doug Mendez, to her door, her libido awakens. Her heart might not be ready for commitment, but a no-strings-attached affair with the king of hookups might be just what the doctor ordered.
Doug needs a date to his sister’s Christmastime wedding. Since he’s been taking a break from dating, he has no prospects, but a cute woman he meets on the job—and who happens to be an old friend of his sister’s—agrees to step up. On one condition: that he reintroduce her to sex in a casual hookup. Charitable guy that he is, he agrees, but soon realizes he wants more from Cassie than a holiday bargain.

The Things You Mean To Me (Knight Skies Prequel) – Sydney Holmes
“The Knight Skies series will burn you up from the inside out.”
The Things You Mean To Me (Knight Skies Prequel)
You all met the sexy Knight clan in The Things You Do To Me and now we go back in time to see where it all began. Mia and Jackson Knight were not always the stable, loving parents we learned to love in the Knight Skies series – they too were young lovers struggling to find each other. Dive into their love story in this sweet Christmas romance.
It’s 1983, U2 just released their new album ‘War,’ Rubik’s Cubes were in every household, valley girl’s wore leg warmers and side pony tails with crimped hair, and all the guys were all looking for bodacious babes. Jackson Knight wants to get to know the new sassy Italian exchange student, but things get gnarly when his girlfriend gets wind that Jackson might be interested in someone else.

After a nasty public break up, actor Kevin Wright returns to his small Nevada hometown for his baby sister’s wedding. Dubbed as “Scrooge” by his ex girlfriend’s slander, Kevin’s life and career are on the verge of being destroyed. He’d give anything not to have to tell the truth of what really happened, but staying silent may not be the answer.
Sasha Moretti has big dreams, but is weighed down by the lack of funds to get her ailing father into a facility that can provide twenty-four hour care. He’s all she has, but he isn’t getting any better. Taking care of him at home is proving to be harder with each passing day. After several run ins with Kevin, the boy she loathed in high school, an opportunity arrives that Sasha finds hard to turn down…
Between the holidays and a wedding, there’s a little madness and magic in the air. Romantic feelings develop between Kevin and Sasha, but when the truth is spoken, can they both get past their demons and let a little love in their hearts?

Christmas in the Harbour – Victoria Barbour
Hannah Nolan loves to loathe her devil-may-care roommate. Or maybe she loathes her love of him. Whatever it is, she’s had enough. It’s a good thing Christmas is here. She’s heading home to spend the holidays with her family in the small town of Heart’s Ease and figure out her life.
Toby Sweeney doesn’t have time for love. The handsome owner of an Irish pub, and one of St. John’s most sought-after bachelors, wants nothing more from the Christmas break than to be alone, drink beer and watch hockey. And maybe figure out how to get his problematic lust for his roommate under control.

Miracle Of Love – Allie Boniface
Lindsey Point paramedic Mick has been in love with his best friend Annie for years. When they find themselves stranded during a blizzard along with a pregnant stranger and a pair of lost donkeys, will these friends finally realize their feelings and become lovers? Or will the storm separate them for good? It might just be time for a holiday miracle of love in this Hometown Heroes novella.

Christmas in Stilettos – Rebecca J. Clark
A marriage of convenience…
Francie and Dylan Maguire married for practical reasons, not love. Once he gets home from deployment, they’ve decided to go their separate ways. There’s just one little problem—his family thinks they’re happily married…and his parents and siblings are expecting the couple home for Christmas.
A temporary husband…
Francie tries her best to get through three days of family dinners, holiday traditions, and sharing a bed with her husband—a very cozy double bed. But the more she pretends, the more she realizes it’s no longer a charade for her. Unfortunately, Dylan’s made it very clear that their marriage is temporary.
Christmas…a time for miracles…

Almost Romance – Kylie Gilmore
Physicist Kate Lewis is shocked when the man she left behind travels one thousand miles to crash the physics department’s holiday party and ask for a second chance. Kate doesn’t do long-distance relationships. But she does do Ian. Multiple times. Small problem—she has a boyfriend. Too bad love isn’t a science.

Kissing Cooper – Liz Kelly
Scorched by an old flame, Cooper Crenshaw, Henderson High’s championship-winning baseball coach, has done everything in his power to avoid coming back to town. So running into Christy-Lynn Brilhart ten minutes after his return is less like a Christmas miracle and more like Cooper’s own personal Nightmare Before Christmas.
Now a stylish businesswoman, Christy-Lynn may be done wearing hand-me-downs, but she sure isn’t done setting Cooper’s blood on fire. As the Christmas season heats up, so does his desire to get to the bottom of their abrupt breakup. Realizing the town he still loves could use his major league help, Cooper figures it’s time to tie up a few loose ends.
With holiday ribbon.
To his bedpost.

A Ring For Christmas – Wendy Ely
Hard work. Determination. Loyalty.
Nautica Pepper learned from an early age that nobody can stop her from following her dreams. She’s one of the few women boxers at One Punch Gym and demands that the women fighters get the same amount of attention as the men. With work on her mind, she doesn’t want to notice the hot guy who wants to join the One Punch family.
He wants nothing but the best!
Javier Cruz already landed himself in a match with Trent McGibbon once before and won! Trent’s trainer, Felix Manzi, is the best in the biz, and Javier isn’t too proud to beg for a chance at joining the rest of the crew at the elite gym. If he trains with the best, he’ll be the best, right? He has one chance to prove himself to Felix and to Nautica. Felix gives him a fight on Christmas Eve that Javier can’t miss. But a family emergency sends him racing across the border.
Will Javier make it back in time to fight? Will Nautica decide that loving Javier is worth the risk?

A Christmas Kiss to Remember – Magda Alexander
Haunted by painful memories of a tragedy from Christmas past, Kate Brooks wants nothing more than a brief affair to help her get through the holidays. She gets her wish one cold December night when Marco Fazzone struts into her life. Soon she’s rolling like thunder beneath the sheets with the six foot four hunk. But what happens when her Italian stallion wants more than a month of Kate in his bed? What happens when he wants forever?